skip to main | skip to sidebar

Ellis on the move

Given it's ...ahem... some time since I blogged here, I'm officially putting an end to this blog. I'll leave it up, but won't be posting here any more.

I have started a new blog, archiving some past projects and posting notes and current work in progress at http://ellishutch.tumblr.com/

Check me out over there.
Posted by ellis hutch at 8:37 am No comments:

Yep it's midnight - actually 12.01 where I am, so officially Christmas day. I'm in Brisbane for a couple of weeks on my way back to Thailand. After a year of not-much-art making I'm spending a week doing theatre/performancy things at Woodford then heading further tropical north to work on a collaborative project in the little art haven of Compeung.

My trip resolution is to keep a diary - something I didn't do on the last trip and have found that video footage just isn't the same as written notes, collected scraps and sketchy drawings. The bits of stuff accumulated in a book have a special function for me - they have a different relationship to memory than the digitally generated images that fill our lives, their materiality, fragmentary nature and objectness provides me with a connection to place and experience. They generate ideas, they inspire new directions...

As well as a physical diary I'll try reviving this blog and incorporating it into my exponential note making habit.

So trip highlights so far: swimming at Safety Beach just north of Coffs Harbour yesterday at 6am, standing in the ocean listening to the roar of the cicadas over the sound of the waves, the amazing limey smell of the bush walking back from the beach, the birds, heat, humidity and rain...
Posted by ellis hutch at 5:01 am 2 comments:

Posted by ellis hutch at 9:26 pm No comments: 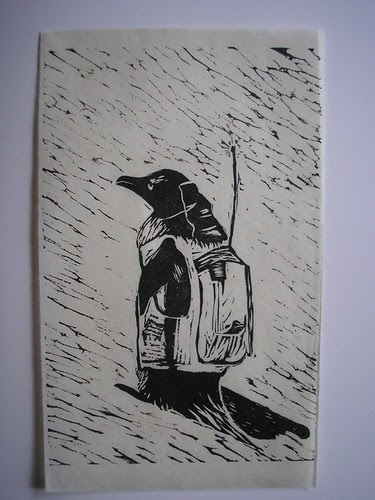 This year I've been running between casual jobs, study and various projects. It's been almost impossible to think about making art, let alone do it. But I have managed to squeeze in a weekend workshop at Megalo doing some lino printing and this little fella is one of the results. I also got some embossing done and another couple of images carved out. The luxury of two full days in a studio just playing with materials is something I haven't experienced in years - gotta get a bit more of that into my life.

Ahh live music - It feeds my soul and causes me to injure my knees. This weekend I've been to the Baterz tribute gig on Friday and the Wedded bliss CD launch on Saturday.

The Baterz tribute was nicely chaotic with Fred Smith doing a stirling job as MC and Mal Webb pulling off a most entertaining version of the song Spider Mother. Highlights included versions of Zombie Girl and On Come the Men. The gig was held to launch a CD of covers of Baterz songs, sung by a diverse range of excellent Aussie talent, called Great Big Squiddy Fun - it's ace - I listened to it all day. You should definitely buy it.

The Wedded Bliss gig was also a CD launch for Swinging Arms Hotel - I haven't heard it yet - but the gig was a lovely affair and the bonus was getting to see local group Hashimoto do an intimate acoustic set with a piano in the middle of the room.

In other news it's cold here and I need some ugg boots and a new hot water bottle, and maybe an electric blanket - I've always thought electric blankets were a bad idea but now I'm not so sure...
Posted by ellis hutch at 8:00 am No comments:

I've gotten hold of one of those fab retro orange Penguin books and been reading South by Ernest Shackleton. I'm loving the mirage descriptions:

"At the same time the ice cliffs of the land were thrown up in the sky by mirage, with an apparent reflection in open water, though the land itself could not be seen definitely. The effect was repeated in an exaggerated form the following day, when the ice cliffs were thrown up above the horizon in double and treble parallel lines, some inverted...

Bergs and pack are thrown up in the sky and distorted into the most fantastic shapes. they climb, trembling, upwards, spreading out into long lines at different levels, then contract and fall down leaving nothing but an uncertain wavering smudge which comes and goes. Presently the smudge swells and grows, taking shape until it presents the perfect inverted reflection of a berg on the horizon. These spread out into lines until they meet, and are girdled by lines of shining snow cliffs, laved at their bases by waters of illusion in which they appear to be faithfully reflected.

So the shadows come and go silently, melting away finally as the sun declines to the west. We seem to be drifting helplessly in a strange world of unreality."
Posted by ellis hutch at 7:18 am No comments:

Things to see and do

After months of long working hours I managed to escape home last weekend and made a nice little art and food trek to Sydney. Food highlights were introducing friends to bacon and maple syrup french toast in Mittagong, Dhosas and goat curry in Newtown, Yum cha in Chinatown and oh so many cakes from Caketown. Marrickvillia has written an excellent post on Caketown giving the lowdown on the couple who own and run the business. I try to get there any time I'm in Sydney along with Martini cafe, down the south end of King St who do great breakfasts.

On the art side we got to the drawing show at the MCA which has inspired me to get my pencils sharpened up and get drawing again. There's a really nice range of work, from really simple pencil and pastel on paper works to video and a great big drawing machine. I was particularly enamoured with the video work by Gabriella and Silvana Mangano a beautifully choreographed drawing performance that kept me watching through several repeats of the video loop.

We also popped in to Brenda May Gallery to see the work of our mate Joel Bliss - who works with timber and metal creating raw, dark and imposing sculptures. Nice to see the whole body of work in that space - the high ceilings and lighting worked really well, giving the works enough space for walking around and some great shadows.

Time to get out and see more art!
Posted by ellis hutch at 4:54 pm No comments:

work in the Phoenix prize 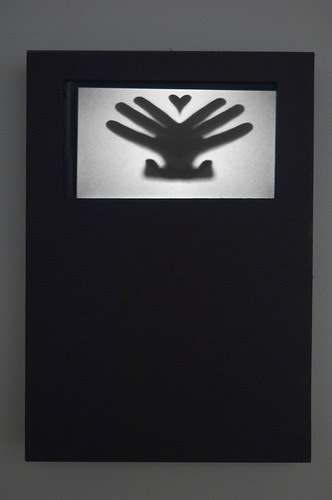 This image is a detail from a video installation I've currently got on show in the Phoenix Prize for Spiritual Art. The work that won was Loft by Kensuke Todo - beautiful piece of wall mounted sculpture. I'm thrilled to be showing in this exhibition, it's got some really lovely works in it. It's on at the ANU School of Art Gallery Ellery Cres Acton until 25 April.

Posted by ellis hutch at 7:57 pm No comments: